Your Travel Guide To
Tipping Etiquette

Tipping etiquette varies greatly from country to country. So it's no wonder why tipping - and especially how much to tip are among the most asked travel questions. This article will explain different tipping customs,when to tip, how much to tip, and how to tip.

When To Tip And How Much To Tip?

How Much To Tip
Is Not An Easy Question

How much to tip is even bigger question than when to tip. In some countries, certain percentage on top of the price is expected while modest rounding up of the bill is sufficient in other countries.

Many people find tipping socially awkward and even embarrassing, especially those of us that come from cultures where tipping is not a custom.

It is important to realize that there are no rules set in stone when it comes to tipping. The general guideline is to think about how well the service was performed and tip accordingly.

But when travelling you also need to bear in mind that tipping is inherently linked to social customs and varies greatly between different cultures and countries.

Tipping Around The World

Tipping customs around the world varies greatly and there is no one rule you can use for tipping wherever you are. Neighboring countries though tend to have similar tipping customs.

Our World Tipping Etiquette Guide gives you an overview of what you can expect when travelling to different parts of the world. You should always check exactly what the customs are for your travel destination prior to arriving there. 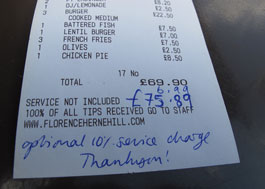 In the UK tipping is often
added optionally to your bill

Your travel guide should have a section about the tipping customs at your specific destination. Your travel agent should also be able to provide you with some general tipping guidelines. While Wikipedia is a non-commercial website, that offers helpful information about tipping in general.

Our Tipping Top Tips however offers practical tipping tips that are valid where ever you are in the world. Like paying the tip with your credit card, what to do if service charge is included in the bill, why it is good to hoard small notes and coins and why you should do as the locals do.

Cruise lines employees often have to rely partly on tips to supplement their wages. cruise tipping customs is therefore one of the most frequently asked question by those new to cruising.

As always where tipping is concerned, there is no simple answer and no global cruise tipping policy in place. All cruise lines issue tipping suggestions and tipping guidelines to their passengers.

Our Guide To Cruise Tipping gives you an overview of the cruise tipping guidelines of some of the main international cruise companies.