Adventure Travel In The Amazon Jungle
Once In A Lifetime Experience

Travelling into the Amazon jungle is challenging, there is no doubt about that. We have never been as dirty, smelly and bitten by insects in our whole life. At the same time it is amazing experience and great achievement, true travel adventure that you will never forget.

Visiting and camping in the Amazon rainforest is once in a lifetime experience as you are most likely unwilling to do it again... for a while at least. We would however love to go back now... few years later.

How To Travel Into The Amazon Jungle?

There are number of ways to travel to the Amazon rainforest. We decided to go on a private one-week Amazon trip where you are “roughing it” (at least by Western standards). We travelled by small boat, slept in hammocks with only mosquito nets for added comfort, and bathed each day in the river (Rio Negro tributary of the Amazon River).

It is not cheap though, you are paying for the adventure and the experience. We also went on private Amazon trip, i.e. just the two of us, guide and two helpers. You can of course do it cheaper if you travel in a group.

Another option is to travel by riverboat in relative comfort, i.e. with your own cabin, shower and air-conditioning. But then you do not get the thrill of hiking and camping in this amazing jungle.

As most travelers to the Amazon do, we started our journey in the Amazon city of Manaus, which turned out to be bigger and better than expected.

We spent the first day preparing for our trip. We bought 3 huge cans of mosquito spray (we used it all), very cheap trainers to throw away afterwards (though they are still in good condition after few years of use), light raincoats, rice (to reduce the humidity in our Camera Bag) and lots of plastic bags for our clothes and bags.

We travelled by a small boat, the two of us and three members of the Amazon tour company, i.e. guide, boatman and cook. We also had access to a small (leaking) tree canoe to use for the Amazon excursions on the way. The canoe was used to access areas were the larger boat could not reach and to get closer to the wildlife. 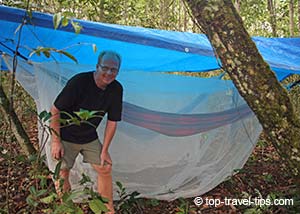 We put up camp in the jungle every night. We slept in hammocks, which were more comfortable than expected (though we have not thrown out our beds). We learned (the hard way) that the secret with sleeping in hammock is to lie sideways.

We had mosquito nets, though they and the mosquito spray, did not manage to protect us from nasty bites... we have never been bitten so much in our lives by the end of the week.

One night we put up camp further inland from the river. The purpose was to allow us to experience more wildlife. It soon became clear that the Amazon tour staff had limited interest in finding any wildlife. They actually seemed a bit scared, which was not very reassuring.

Our guide seemed to be working on his “Dutch courage”, drinking Cachaça straight from the bottle (around 40% alcohol), before we left the camp searching for wild animals. It was maybe fortunate that we didn't find any big wildlife... or should we say it didn't find us.

We did though wake up in the middle of the night with loud animal sounds. Our guide (sober enough by now) thought it was a group of tapirs and no one slept much after that. It was a long night, just lying in our hammock in the dark.

The cook prepared our meals on open fire and they were very good, especially with the facilities she had access to. Fortunately we didn't have to sit on the rainforest floor as our luxury items were travel chairs and desk. 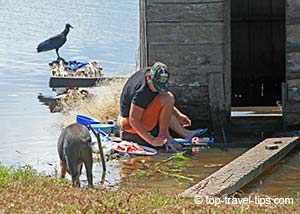 It is however difficult to keep things clean and hygienic in the jungle. We sometimes wondered if our stomachs could take it. Luckily they did, even when the cook was preparing chicken dinner on the river bank... with a pig and vulture keeping her company.

There are of course no bathroom or toilet facilities in the jungle, only big forest and big river. We bathed in the Amazon River every day though we sometimes wondered why. The minute we had dried ourselves we were sweating buckets again from to the humidity in the jungle.

What Do You Do In The Amazon Jungle?

There is plenty to do in the Amazon rainforest, mainly exploring the rare and exotic flora and fauna. We explored the jungle both on foot and by boat.

Good guide will make it interesting to walk in the jungle exploring the forest floor by foot, pointing out plants, flowers, and vegetation you have never seen before and of size that is quite impressive. The color is green, wherever you look. 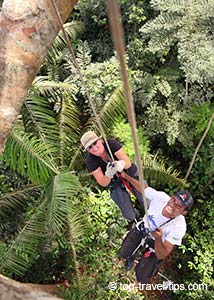 Tree climbing in Amazon Jungle
We felt like David Attenborough

On the first day we went tree climbing, which is great fun but much harder than it looks. We were sweating buckets by the time we reached the top... 30 meters above ground. The view was breathtaking (too), when we managed to look up from our tree hugging (both being seriously afraid of heights).

We were though very pleased we made it... just like our hero David Attenborough.

Your guide should also be good at spotting wildlife, though don't expect to see many big animals in the Amazon jungle. You will however see many insects, some quite peculiar looking and some quite big.

On one of our jungle walks, our guide suddenly jumped up on to a small tree that couldn't hold his weight and started slowly to bend. It was actually quite funny until we realized what was going on. He had almost stepped on very poisonous snake. You would have only two hours to get to hospital for antibiotics... which we didn't have, and the hospital was more than two hours away!

Luckily, we saw the snake in time but it was a good reminder that rainforests are no “walk in the park”.

You see more “big” life on the river. On our boat excursions, we saw lots of birds, caimans and even one sloth (it was in the exactly same spot when we sailed by again week later).

We also went Piranha fishing which was great experience. All you have to do is put a piece of meat onto hook and drop it into the river. You will quickly catch one, though some of them were masters in eating the meat of the hook. 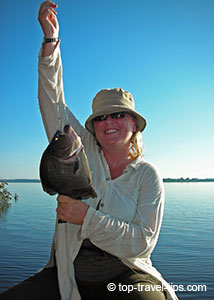 Piranha fishing in the Amazon river

The catch of the day was cooked up in a piranha soup, did taste pretty bad... though it was pretty cool to have tried it.

We went on several boat night excursions, which were interesting as well. One evening we got lost for almost two hours. We were starting to anticipate very uncomfortable night on the small leaky canoe but luckily, we found the way back in time.

One evening we went looking for baby caimans. Our guide caught one and allowed us to hold it for little while before releasing him back into the river.

On our last night in the Amazon jungle we visited a small Amazon village, i.e. where our boatman lived. There was some local ceremony going on and he wanted to attend. We were invited to join in the proceedings, which was nice experience.

Back To Manaus, The Capital Of Amazonas State

It was really good to get back to our small and comfy guesthouse in Manaus. As you can imagine, we started with a loooong shower and then good meal and ice-cold beer before heading to BED.

The guesthouse also served the best breakfast we have ever had... with or without having spent a week in the Amazon jungle. All the ingredients were fresh and varied between the days we stayed with them, i.e. fresh juices, omelets, pancakes, quiche, fresh fruit, newly baked bread, croissants, etc.

From Manaus we went to see the meeting of the rivers, i.e. where the river Amazon and river Negro meet. The Amazon River is lighter in color and cooler than the river Negro. Due to the different speeds, heat, and PH values of the water, the rivers run side by side for several kilometers.

You can easily see and feel this by putting your hand into the river. One side is cold and the other side is warm. Pretty amazing to experience.

We thoroughly enjoyed our adventure travel to the Amazon jungle. It was a great experience... not least afterwards.

If you are planning to travel to the Amazon jungle, you MUST take necessary Malaria Precautions. You will be bitten - it is only a question about how badly.

You must also take care in the sun. The sunrays will not reach you while in the forest but you must be careful on boat trips as the water reflects the sunrays. Sun And Insect Protection Clothing are recommended any Amazon adventure travel.